Barsana and Nandgaon are two neighbouring villages or town near Mathura in the sate of Uttar Pradesh, India. City of Mathura has a massive historical and religious significance in India for being the birthplace of Hindu mythological figure Shri Krishna. Shri Krishna inarguably is the most popular of all Hindu Gods with Lord Shiva being his only competitor. Among the many tales of Lord Krishna believed and worshiped by his devotees, his romantic escapades with Radha is the most popular.  Radha and Krishna are always seen together in every temple and other religious imagery or narrative and are worshiped together as a couple. Among some devotees the love between Radha and Krishna is known as the source of all power in the world. Yet, you’d be surprised to know that Radha and Krishna were not married to each other, in fact as per certain scriptures, Radha was married to Krishna’s uncle and Krishna was married to Rukmini.

In the larger Hindu religious population’s imagination Rukmini and her marriage to Krishna has no significance, Krishna’s other powers also pretty much are taken for granted, the thing that gets most mention is his Raas Leela with Radha and her Gopiyan. Raas Leela is what you can say is mythical time’s Valentine’s Day celebration, like dance of love, being playful in love etc. There are many songs and scriptures dedicated to the eternal romance between them and the Lathmar Holi festival draws inspiration from one such story.

Legend has it that few days before Holi Shri Krishna a resident of Nandgaon, visited Radha’s village Barsana to play Holi with her. As always in his habit of teasing Radha and her maids (gopiyan) he did something rather naughty and the girls got angry and chased him and all other men away with sticks. Since then, it has become a custom for devotees from Nandgaon to visit Barsana to play Holi and the next day devotees from Barsana visit Nandgaon. Barsana is the only place in India (perhaps world) which has a Radha temple (Shri Krishna temples all over the world have Radha’s murti along with Krishna but this is the only temple dedicated solely to Radha). Women of Barsana dressed as Radha and Gopiyan beat men with sticks at the temple ground and the spectacle is watched by a massive crowd 30% of which is consisted of photographers. Needless to say, this atheist’s only interest in the event was photography and here I present you the frames.

Devotees, tourists, photographers from Nandgaon and all over the world start gathering near the Radha Temple in Barsana, early morning on day one where they wait for the temple door to open. 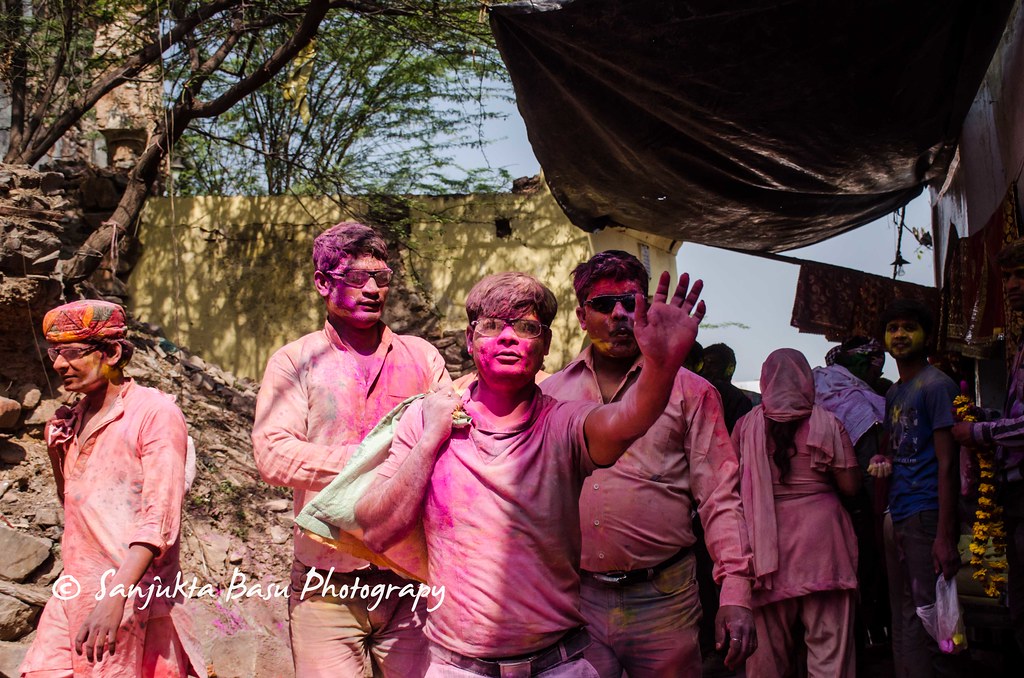 Men gather in front of the temple door waiting for it to open, they sing bhajans as they wait. 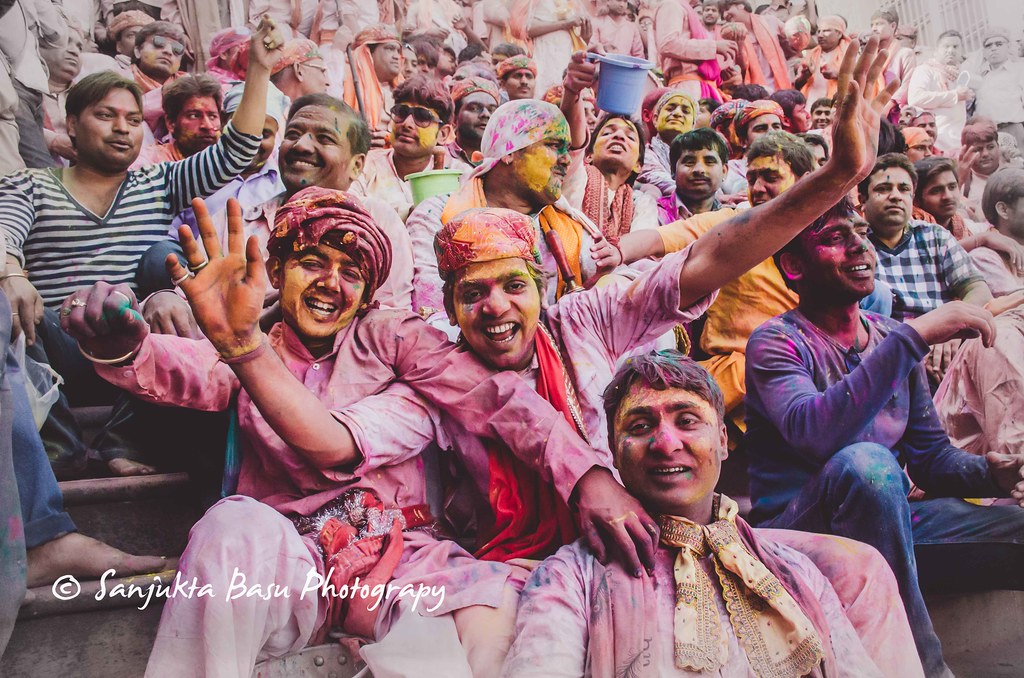 Once the temple doors open, devotees go inside and while they gather on the ground floor, the residents of this village start pouring colour on them from the vantage position  of first floor balcony.

Even as colours continue to pour, tolis sit down and sing holi bhajans.

The next day, similar play take place in Nandgaon when the Radha and her friends visit Krishna’s village. The devotees from Barsana gather at the open premises of the temple and local devotees pour colour on them from the upper corridors.

Entire floor of the temple floods with colours

A very prominent of the vibrant transgender community is seen in the festival. Many of them come dressed as Radha and her friends.

After 3-4 hours of play with colours in the temple, towards the evening entire crowd of devotees thousands of them gather at the open space near the temple for the ritual of “lathmar” (beating with the sticks).

Here Radha and her friends dressed in bright gorgeous saris and jewelry carrying big heavy sticks beat up the men. The men are only supposed to protect their head with a leather pillow of sort.

Even as a massive crowd of mostly men, but many women too jostle and play, the security forces keep a sharp eye on miscreants to prevent any untoward incidents. Reports of molestations are often heard, so several many female police staff are deployed in the area.  These cops have to bear all the colours and water throwing, and still carry on their duty.

At the lathmar ground many quirky devotees can be seen,  one playing flute and dancing, another rolling on the floor for some wish fulfilment.